Pune’s main rivers, the Mula and Mutha have several tributaries. These form a part of the Upper Bhima Basin. One such river, Ramnadi, originates in the Khatpewadi village commons and fields in the Sahyadri hills to the south west of Pune city. From its origin at an elevation of about 950 metres, the Ramnadi traverses about 19 km through Bhukum, Bhugaon, Bavdhan, Pashan, and Baner, finally meeting Mula River in Aundh. It drains a watershed area of nearly 51 square kilometres.

In a map of 1890 of the Bavdhan area, Ramnadi is referred to as a river with a width of 48 metres.

Ramnadi supports fields and livestock farms on its way through Bhukum and Bhugaon to Bavdhan in Pune.

Although some agricultural pockets survive, land use in the upper catchment of Ramnadi is changing. Resorts, farmhouses, apartment blocks and restaurants are replacing fields in the vicinity of a percolation tank across seasonal streams in Khatpewadi. 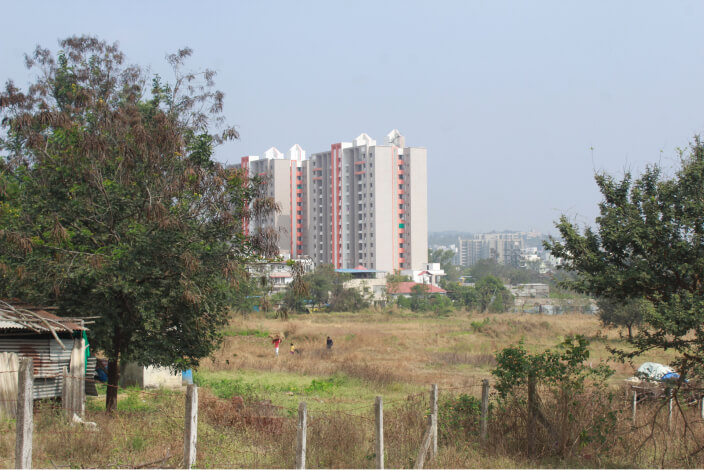 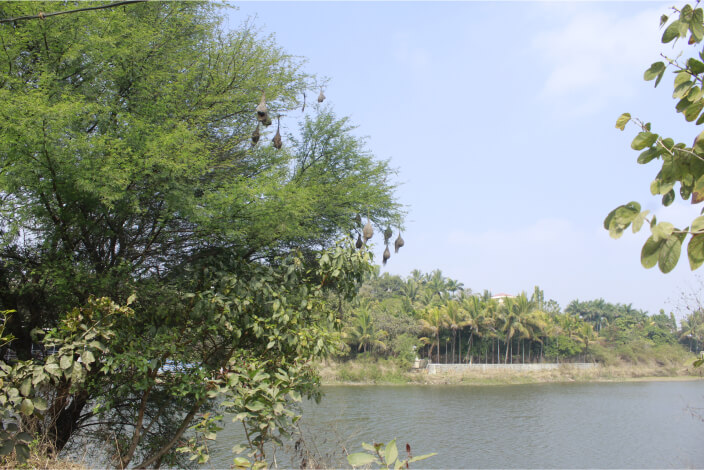 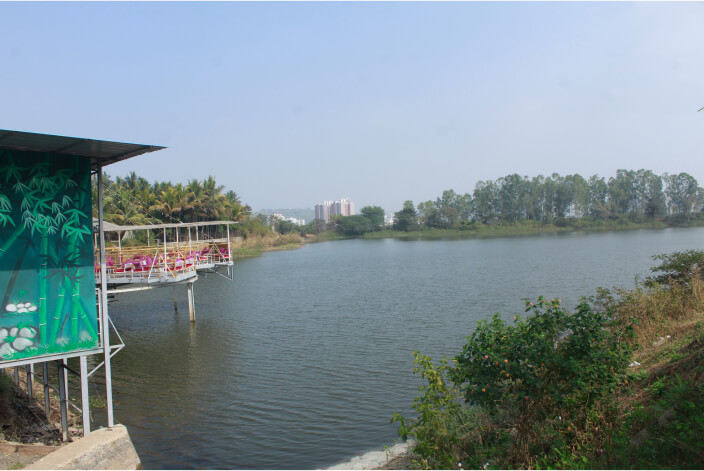 A bund across the Ramnadi a little over 3 km in its journey forms the Manas lake at Bhugaon. The lake sustains fishing, farming, recreation and water supply in the area. 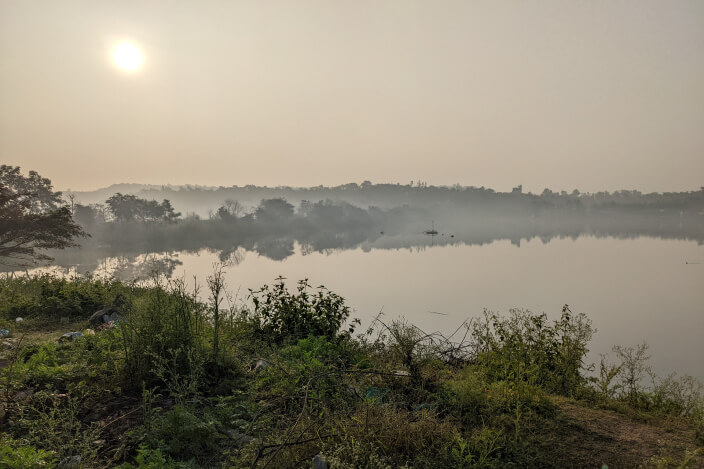 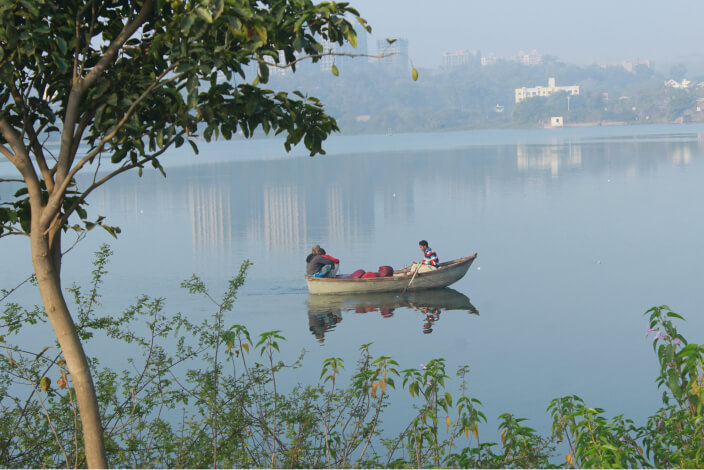 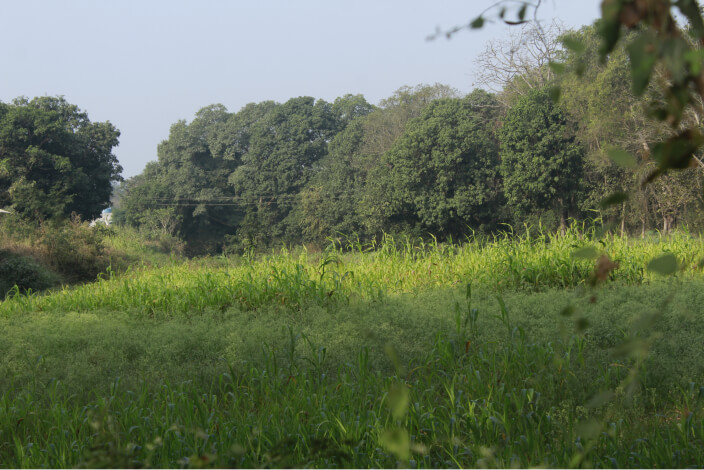 The bund and the spillway at Manas lake, Bhugaon

The kutcha road on the Manas Lake bund connects the two banks. You may find fishermen in a boat with direct dependence on the lake for livelihood, along with early morning joggers from nearby apartments that draw water for domestic use from the lake. The spillway from the lake continues the downstream journey of the Ramnadi.

From the peri-urban to the urban

Ramnadi, just upstream of the Pirangut Road and the city of Pune. 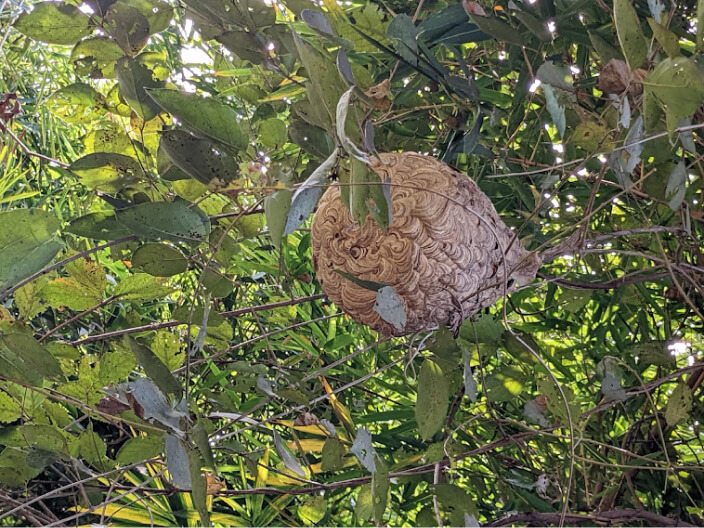 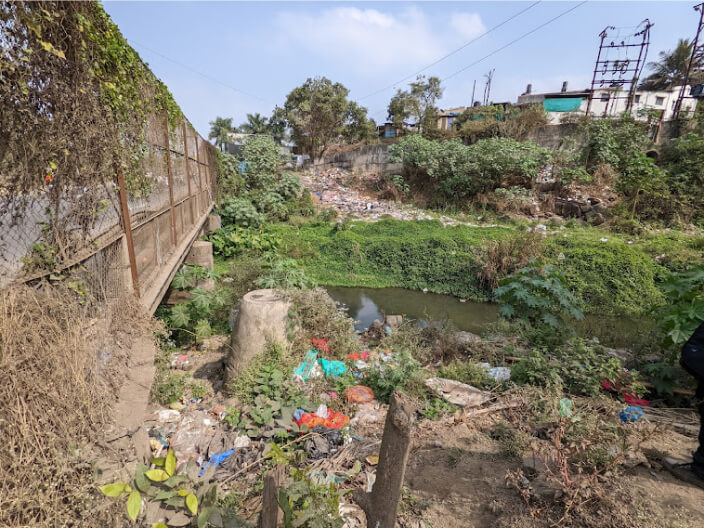 Springs lost and disappearing in the urban catchment

A spring where you could fill a canteen in seconds, is now a trickle you might easily miss, at a private property in Bavdhan next to the Ramnadi. Recently added to the Pune Municipal area, Bavdhan has large residential complexes but inadequate facilities to treat the sewage which currently flows into Ramnadi.

Threatened springs in the urban catchment

Studies of the groundwater regime in Pune by ACWADAM show that the Bavdhan hills are crucial natural recharge areas in the western Pune urban region. Several springs and underground water flows in the Bavdhan area join the Ramnadi. Hydrogeological studies should guide conservation of recharge areas, spring discharge areas and aquifers. Such studies are suggested to also guide permissions for the construction of buildings, and construction techniques that aid recharge.

Drawing on the sewage as a fertilizer, water hyacinth covers the river as it flows from behind Ramnagar Colony into Pashan lake. Ironically, sewage pipes bought with public funds, lie unused alongside the river bed as a project to set up treatment facilities was not completed.

Encroachment of the river bed and dumping of construction debris led to reduction of the carrying capacity of the river channel. Consequently, Ramnagar Colony suffered a major flooding event in 2010 that led to loss of life and property. 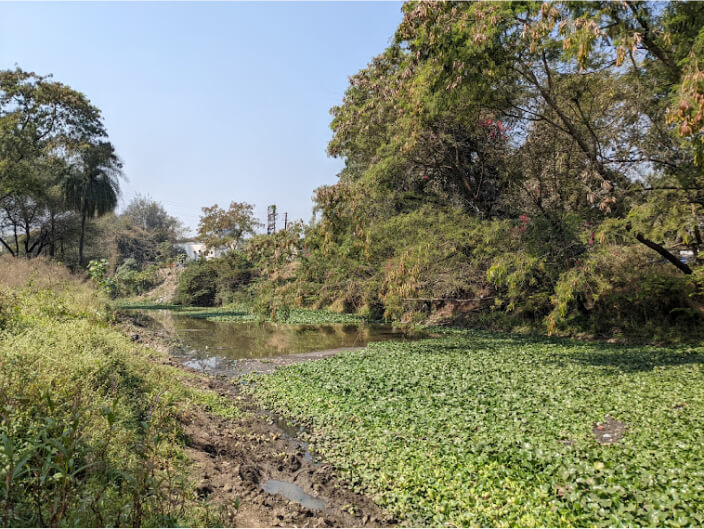 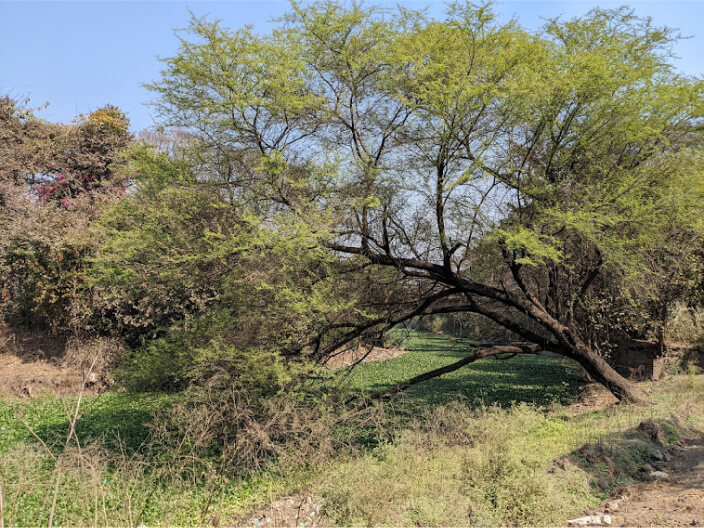 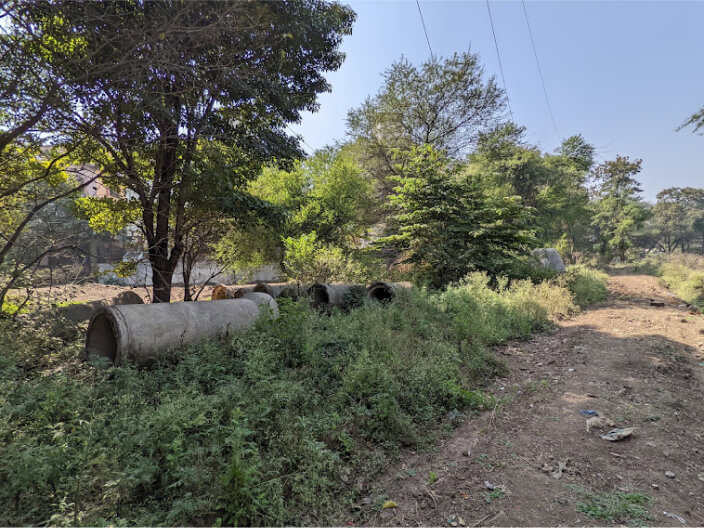 The river banks have a mix of native trees and plantations of exotics species like eucalyptus. Invasive species like ipomea and eupatorium form the undergrowth just upstream of Pashan lake. On a walk along the lake, you might come across a Giant Snail (or its shell), an exotic, invasive species that may sometimes infest gardens and campuses.

Pashan lake was built by the British in 1867-68 at a cost of ₤16,700 (when ten Indian rupees equaled a British pound). Water from the reservoir was supplied to the Gun Powder Works in Kirkee. Stored water was pumped and supplied to “Government House” in Ganeshkhind. This building is now part of the Savitribai Phule Pune University. The lake was frequently used for duck shoots by the British until the military presence in the area increased.

Pashan Lake is a wetland ecosystem that sustains vegetation and animals including fish, birds, insects and other invertebrates, and micro-organisms. Water from the river and the lake percolates into the ground and recharges groundwater. Aquifers, that are groundwater streams that emerge as springs in or near the river course, may also be contributing to the water flow in Ramnadi and in Pashan lake.

A lot lies beneath!

An insect known as “water boatman”

The shores of the lake have an intimate relationship with the lake. The riparian zone is a very productive and critical area and helps in absorbing floodwaters, feeds aquifers or vice versa, purifies water, provides habitat for fish, water birds. Vegetation in the riparian zone provides perching and walking habitat for birds like swamp hens and jacanas.

Reed-like vegetation rooted in the wet mud is an excellent habitat for small birds like warblers, munias and weavers. It also is used as a nesting habitat by many birds. Grassy patches are ideal for birds like lapwings, wagtails, pipits and geese. Scrubby, bushy bank vegetation supports birds like babblers, chats, prinias etc.

Trees on the island in the middle of the lake act as roosting and resting spots for water birds like cormorants, egrets etc. The island banks are also used as a resting area by migratory ducks. The lake is surrounded by hills. Vegetation on these hills hold on to the soil and helps prevent siltation of the lake. Protecting the hills also helps conserve the lake.

Guests from far away!

Ducks and wading birds like several sandpiper species arrive at Pashan Lake in the winter. The bright ruddy shelducks, unmistakable in their orange-brown coats arrive from southeastern Europe and central Asia. Several species of teals and pochards as well as the northern pintails with their pointed tails and the northern shovelers with their wide, flat bills are common.

Wagtails can be seen darting about on the grass on the shores. Gull-billed and whiskered terns join the resident river terns. Migratory raptors like the Eurasian marsh harrier send the water birds into a flurry as they fly above the lake scouting for suitable prey. Several woodland birds also arrive at Pashan to spend the winter in the vegetation around the lake. These include the tiny warblers, the pretty flycatchers, chats and barn swallows.

Though the bird diversity of Pashan Lake is augmented in winter, there are several resident bird species too. Pygmy cotton geese are seen all year round, as are little grebes. Cormorants are often seen diving for fish or drying their wings on a perch. The blue flash of the white-throated and common kingfishers cannot go unnoticed. Several species of egrets can be seen foraging in shallow water along with Indian pond herons and painted storks.

Grey herons, purple herons and purple swamp-hens can be spotted quietly wading in search of food. White-breasted waterhens can be seen foraging in the dense underbrush. Common moorhens and jacanas are usually seen gingerly walking on the floating vegetation with their long toes. The scrub vegetation and plantation on the banks is full of woodland birds.

One cannot miss the bright sunbirds or the chirpy bulbuls, mynas and sparrows. The songs of the coppersmith, Indian golden oriole, greater coucal, common iora and spot-breasted fantail flycatcher are always a pleasure to hear.

Though Pashan Lake is known for its birdlife, a lot of other life also thrives in and around it. The lake harbours fish like barbs, carps, catfish etc. which certain bird species feed on. The surroundings of the lake have over a hundred different plant species and supports different species of insects, molluscs and crustaceans. Insects like dragonflies, damselflies and butterflies can be seen flitting about on the lake and shores, with seasonal changes in the species of butterflies and dragonflies one might find.

The shore vegetation is home to reptiles like snakes, skinks, garden lizards and geckos. Small rodents and mongoose inhabit the banks. The fruit of a cluster fig tree at Pashan Lake sustains many birds and mammals, especially when other food is scarce. Fig trees are keystone species as they support many other organisms in the ecosystem. Fallen trees and branches in the water, though dead, offer support to smaller life forms. Termites, wood borers and other insects, both terrestrial and aquatic, and fungi help decompose the wood.

Once a healthy ecosystem, the Pashan Lake is now highly degraded. Busy neighbourhoods both upstream and below the dam, traffic on the highway nearby, sewage, discarded plastic bottles and bags, immersion of Ganesha idols, and even poaching of birds like water hen and cormorants disturb the birds and other creatures. The Babul forest and marsh grass that formed typha reed beds on the banks have thinned out, while invasive plants like ipomoea and eupatorium now cover the banks. Introduced fishes outcompete the native fishes like Cirrhinus fulungee (Syhes) Reba and Salmostroma boopis (Geinaces). Roads (including the Pune-Mumbai Highway) have been built over the river and its streams, with pipes underneath to allow the river to flow. These pipes often get choked with garbage and construction debris, so the roads above become the river’s alternative route to flow.

In May 2005 the lake was drained and dredged by the Pune Municipal Corporation. Between 2006 and 2008, as part of a ‘Lake Beautification’ effort under the Jawaharlal Nehru National Urban Renewal Mission (JNNURM), the lake was further dredged. The dredged silt was used to create an island in the lake. Over 12,000 indigenous trees and shrubs, including 350 fruit-bearing trees were planted on the island and along the embankments. Non-native and invasive plants were removed.

In October 2010, residents of Bavdhan and a civic group, Pune Jal Biradari, went on a hunger strike protesting illegal encroachments on the river.

A clean-up drive of Ramnadi was taken up by Pune Pratham under the Ram Nadi Cleaning Project on Jan 2016. In 2019, several local civic groups and the Kirloskar Vasundhara Film Festival came together for the Ramnadi Restoration Mission. The then mayor inaugurated the initiative with a clean up drive and desiltation of the Khatpewadi percolation tank, one of the origin points of the river. A series of policy-centric initiatives were recommended to the Pune Municipal Corporation in a report titled ‘Ramnadi Flood Report’ in January 2020.

The Someshwar temple is still an important site of interaction with the river.

Though Ramnadi is highly polluted at this point downstream of Pashan, some have no option but to wash clothes directly in its water, risking their health. Investments in community sanitation and washing areas would help people and the river ecosystem.

Downstream of Pashan, the river is constricted at some places with embankments on the sides.

Downstream of Someshwar, a little rapid forms as the Ramnadi flows over a knot of basalt rock.

Channelized and constrained, with influxes of sewage and garbage, the Ramnadi is in a sorry state at the point that Baner Road passes over it.

Dangers that must be addressed

A road cave-in alongside the constrained flow channel of the Ramnadi at Vidhate Vasti poses a danger to the community, while the garbage dump harms the river.

Just above its confluence with the Mula, the Ramnadi receives treated water from Pune Municipal Corporation sewage treatment plant at Aundh.

Though highly polluted with solid and liquid wastes, the river and its banks are sites for precious wilderness in an urban context.

The confluence of Ramnadi with Mula river at Aundh, Pune and downstream of the confluence.

Go on a virtual nature walk at the lake.